My parents named me after a song by the Allman Brothers called Sweet Melissa, and rock music has had a place in my life ever since. Though I was raised as a classically-trained flutist, I made my first musical arrangement around age thirteen of Led Zeppelin’s Stairway to Heaven. While in high school, I discovered the music of contemporary flutist Robert Dick, who was also influenced by rock. He inspired me to become a professional musician. Several years ago, I had the opportunity to study with Robert in New York, and during that time, he helped me shape this arrangement.
2. CLAIR DE LUNE
Claude Debussy, arranged by Melissa Keeling

This is dedicated to my mom and my grandmother, Grand Jenny.

Grand Jenny, my mom’s mother, was a pianist. Though she passed away when I was young, her musical legacy is one of the ways I feel connected to her. Claude Debussy's Clair de Lune was her signature piece, and she would play it at family gatherings or whenever she came near a keyboard. Since then, this has been a special piece in my family.

My mom is also a pianist, and my first music teacher. As a girl, I remember waking up to my mom playing the piano. When she met my dad, he recorded her playing Beethoven sonatas to give to my great-grandparents (I still have the cassette tape!). Like Grand Jenny, my mom played Clair de Lune from time to time. She taught me so much about expressiveness in music, and I am so grateful for her everlasting support of me as a musician.

To both of these incredible women musicians: thank you for passing on the gift of Music.
4. EPHEMERA
Melissa Keeling

Though it often gets a bad reputation, the piccolo has such as beautiful, graceful spirit. The balance of this dichotomy is at the heart of Ephemera – how can something, like the piccolo, possess both incredible power and such elegance? In this piece, I try to bring out the lesser-known side, the yin side, of the piccolo.
5. MOVING CASTLES
Melissa Keeling

When I sit down to write music, I am always struck by the nothingness in that first moment before creation: silence, an empty page, and endless possibility. I start with one idea, try it on, build on it, listen to where and how the music wants to go. On good days, it feels as if the music writes itself. Other times, it's all garbage and the best thing to do is just throw it out and move on. Like other art forms, music is ephemeral and always changing. Happily, it continues to move relentlessly forward, as it always has.
6. SOLAR FLARE
Melissa Keeling

This piece is a trio for three flutes and back track, and was originally written in 2015 for a composition competition hosted by The Flute View magazine. This is the only track on SUPERSONYQ which uses overdubbing. Sheet music is available on my website.

After living in New York for years, I moved to New Jersey and ended up in Asbury Park, a small town on the Atlantic coast known for creating rock legends like Bruce Springsteen. With its historic architecture, open parks, street art, and ocean views, I instantly felt at peace. Solar Flare was inspired by this town, and warm, sunny days relaxing on the beach at the Jersey Shore.
7. – 9. MANTIS
I.  SPRINGTIME
II. IN THE GARDEN
III. NIGHT
Melissa Keeling

In my family, the praying mantis is a symbol of Life. One spring when I was ten years old, my father captured a female praying mantis. “Watch this,” my dad said as he dropped another mantis into the empty aquarium; it was a small, electric-green male. He was explaining the circle of life: “if they mate, she will lay eggs.” And so they did, as my sister and I looked on. Days later, a cottony egg sack appeared; my dad gingerly moved it to a small bush in our garden. To my supreme joy and amazement, hundreds -- thousands! -- of mantises hatched the next spring, covering the garden, tiny lives that I had witnessed being created, now free in the world.

Mantis is dedicated to my dad, who passed away from ALS in December 2011. I wrote this piece as a way to grieve his passing. This piece is a meditation on his life and the many lessons he taught me.
10. STAR-SPANGLED BANNER
John Stafford Smith/Francis Scott Key, arranged by Melissa Keeling

Almost half a century ago at the 1969 Woodstock Festival, Jimi Hendrix performed his historic solo rendition of The Star Spangled Banner. Using heavy distortion and the whammy bar, he created intense war-like sounds: bombs falling, jets and rockets flying overhead, and cries of anguish. Some critics contend that Hendrix intended this to be an anti-war protest or political commentary. In an interview on the Dick Cavett Show, Hendrix denies that was his intent: “All I did was play it. I’m an American, and so I played it… I thought it was beautiful.”

​Though there are many terrible events unfolding in the world today, this arrangement of the national anthem is not meant as an anti-American protest in any way. I am proud to be an American. As a musician, and like Hendrix, this is my way of expressing patriotism and freedom. 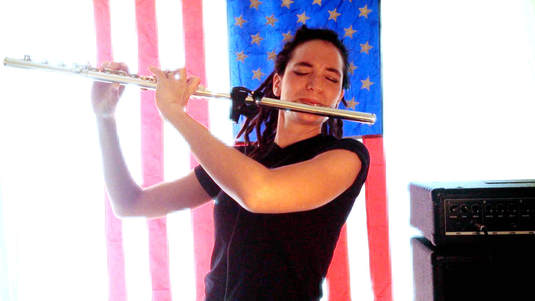