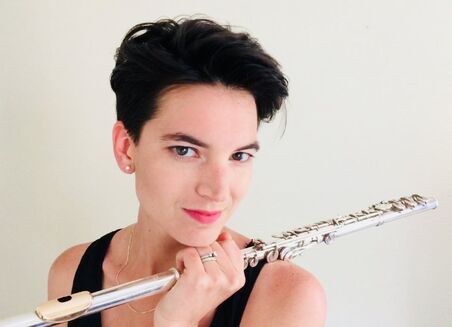 Acclaimed for performing repertoire ranging from orchestral literature to electronic music, flutist and composer Dr. Melissa Keeling is based in the New York City area. Her music has been described as "the most creative flute writing of 2018 next to Bjork... a delight... stunning and moving... SUPERSONYQ is refreshing and necessary to exploring the boundaries of the flute”  (The Flute View). Melissa is a Trevor James International Flute Artist and an Endorsed Artist by K&K Sound.

[Melissa's] voice on the flute has a depth and beauty that enrich all the music made with effects... [I] heard a lot of things I've not heard before."  (Robert Dick)

As an educator, Dr. Keeling has led masterclasses on music technology, contemporary flute techniques, and improvisation. She has experience teaching undergraduate flute lessons, woodwind methods courses, and coaching chamber ensembles. She is a member of Pi Kappa Lambda (National Music Honor Society) and the National Flute Association, and currently serves on the Board of Directors for the Flute Society of Kentucky.

Melissa Keeling is best-known for her works for electric flute and Glissando Headjoint.

"Music is moral law. It gives soul to the universe, wings to the mind, flight to the imagination, a charm to sadness, and life to everything."   - Plato